After six months of learning Thai using only a listening and speaking approach (aural-oral), I decided that it was more and more necessary to learn to read Thai.  My principal aim is still to learn to understand and speak Thai (rather than to read it and write it), but I was beginning to feel frustration sometimes that I could not read some of the material that might help me to understand and speak.  So, this week, I made the decision that I would now make the effort to learn to read Thai.  Note that I'm still holding out from learning to write Thai; I need to hold some ignorance in reserve for a rainy day.

My teacher said I should start by learning the Thai names for each of the consonants, names like "ko kai" (like "A is for Apple" in English, the Thai alphabet begins with "Ch is for chicken"), and "kho khai" (like "B is for baker" or for Thai's "E is for egg" - OK, I know "E" is not a consonant, but I'm just trying to show what it might be like if we were to teach English like this).  I argued with my teacher that I was not a Thai person, didn't know all the objects that the Thai's use to go with each letter (like chicken and egg), and that it wasn't necessary to learn these associations - it was enough for me to learn that a particular letter, like ก was pronounced like the English "g".  My teacher argued - annoyingly persuasively - that it would not be possible for her to teach me to read if we could not call each letter by a specific name.  It would be all very well me knowing that, a particular letter is pronounced, say, "kh", but how do you do spelling if you don't know the Thai names for the letters?  To illustrate the difficulty, let's say I am trying to spell the Thai word for egg.  I might say that to spell it, the first letter is "kh".  My teacher would then reasonably ask which "kh" do I mean?  Ah yes, Thai has - so I'm beginning to learn - five (!) consonants all making the "kh" sound: ข, ฃ, ค, ฅ, and ฆ.  It's OK for me on my own to have in my head a precise idea of which "kh" I might mean at any given moment, but if I have to start communicating with somebody else, I really have to be able to have a language of communication of which letter is which.  It's not really going to be very easy communicating by saying, "the letter 'kh', you know, the one with the arch with the little squiggly thing that comes up like a big fist out of the wall with a Christmas decoration hanging from it".  So, convinced of the need to learn the Thai words for each letter if I'm going to learn to read, off I go.  But if I'm going to have to suffer, you are too!  I am pleased therefore to present to you the complete set of Thai consonants for your study. 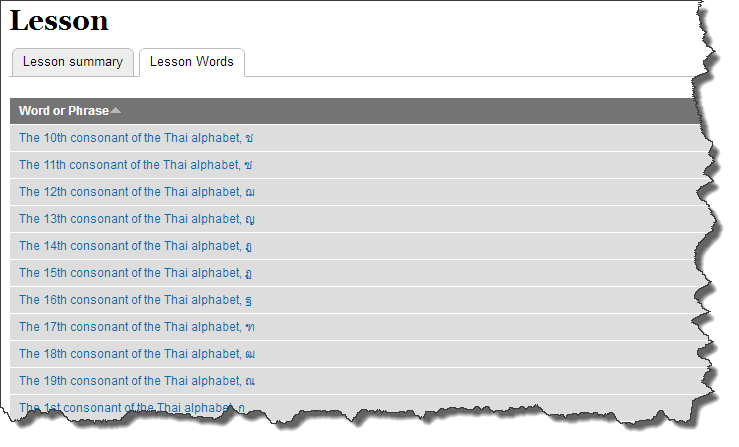 One of things that I wasn't sure of to being with is what to title each consonant page.  I wanted the pages to be easy for an English speaker to read, so not just using the Thai consonant (i.e. in the Thai script).  As you see, I settled on the format "The Nth consonant of the Thai alphabet, [Thai consonant symbol]".  This seems to me to have the right balance between being user-friendly for the learner who does not yet know the Thai letter, but also having the letter in the title (since that, after all, is what is trying to be learnt).