Insights into the hardest-working Thai students

One of the most committed students of Thai on Lingopolo wrote to me and asked:

How many people taking the Thai course?

Are there some people who have been studying Thai with you, longer than me?

Your site is a GREAT resource.

Since I think the answer to such questions are perhaps of general interest I decided to try and answer them here.

How many people are taking the Thai course?

I had a look at the past month, and there were around 185 active students (i.e. they have logged in and studied by answering some questions at least once, often more often).

Who has been studying Thai the longest?

So, let's have a look first at those who have been studying Thai the longest on Lingopolo.

Amazingly, we actually have quite a few students who have been using Lingopolo for many years; not just members for many years, but still having recently logged on to Lingopolo to do some study.

I thought I'd check the "Progress of scores" graph for the 3rd in the list lee****, who only accessed Lingopolo 1 day 19 hours ago, and it looks as follows. Notice that they created a profile in 2014, and didn't really do anything at all that year. Then at the start of 2015 they really got to work. It looks like they choose to skip the easy levels, as described in Is there a way to skip forward to the more advanced material? as shown by the steep vertical lines at the start of the graph. Their last activity was only a couple of days ago.

Who has answered the most questions?

The next thing I looked at was Questions shown. Since Lingopolo basically teaches by questions, this is a great measure of how hard-working students are. The following table shows the users of the Thai site sorted by Questions shown.

This shows that the hardest working student has actually answered a staggeringly impressive 92,704 questions! This is not far off twice as many as the next most hard-working student, who has answered 47,475 questions. And I'm pleased to report that the student behind answering this impressive 92,704 questions, is none other than C, the person who sent the original mail. So, congratulations C, you may not have been on Lingopolo the longest, but you are far and away the hardest working. Well done! 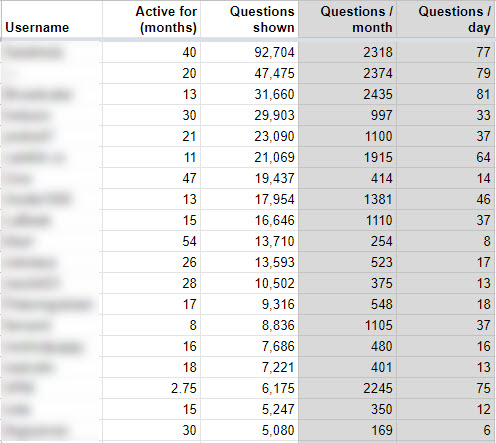 Who has averaged answering the highest number of questions per day?

Finally, I thought I'd have a look at the intensity of study, that is the students who have been answering most questions per day.

In the following table, on the 3rd row, you will see our good friend C who has not only answered 92,704 questions, but he has been averaging a staggering 77 questions a day for nearly 4 years.

In the lead though, for Questions/day answered is Bro******* who has averaged answering an even more impressive 81 questions a day for the 13 months they have been on Lingopolo. 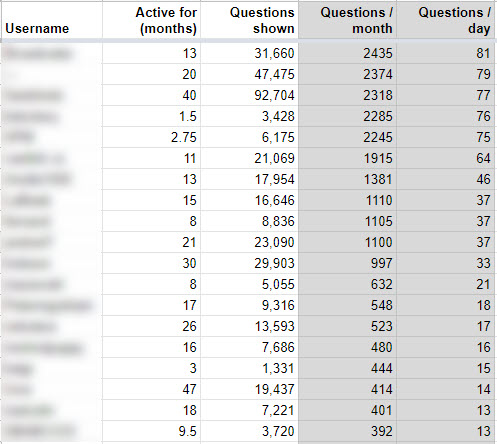 So, there you have it, C you may not have been on Lingopolo the longest, but well done for being the hardest-working student we have ever had.