In an earlier post announcing that Lingopolo becomes 100% free, I wrote about how I'm preparing to build Lingopolo into the world's best system for anybody to learn any-language, from any-language, for free.

Here I would like to explain how this "any-language to any-language" will be done.

What we currently have

Currently, we have only 3 language pairs available.

This can be represented by the following matrix:

The plan of course is to have many more languages, but this is already enough to illustrate how we will build the any-to-any system.

We can, for example, currently teach the word for "dog" to people who speak English:

Using English as the language of translation

The first step, in order for Lingopolo to work from any language to any language, is to make it so that we can teach:

This can be represented by the following matrix:

(Note that in this first stage, English appears only in the column of languages which you speak, and not as one of the languages you can learn. That is because we currently only have recordings for the three languages: Dutch, French and Thai.)

For example, we already know the word for "dog" in each of the languages. Using this information, we will be able to generate automatically the following pages:

Phrases as well as words

Notice that this works not just for individual words, but also for complete phrases, as long as we have the phrase in each of the languages. For example, we currently have:

By matching on the English text "She loves animals.", we can then generate and teach:

The purists might object to going in 2 steps to get a translation, e.g. going Dutch to English to French, rather than Dutch to French directly. However, in practice, for 99% of language learning content (vocabulary like dog, eyes and shoes and phrases like hello, I am twenty years old. and I don't like fish), this method should work extremely well.

For example, if we want to add Chinese, we would only need to add the English to Chinese pages:

For example, we would only need to add the pages:

and then the software would be able to generate all the pages/course material for:

This means that for each extra language we add with just the English, we would get all the combinations of that language to each of the other non-English languages, and every other language to the new language. 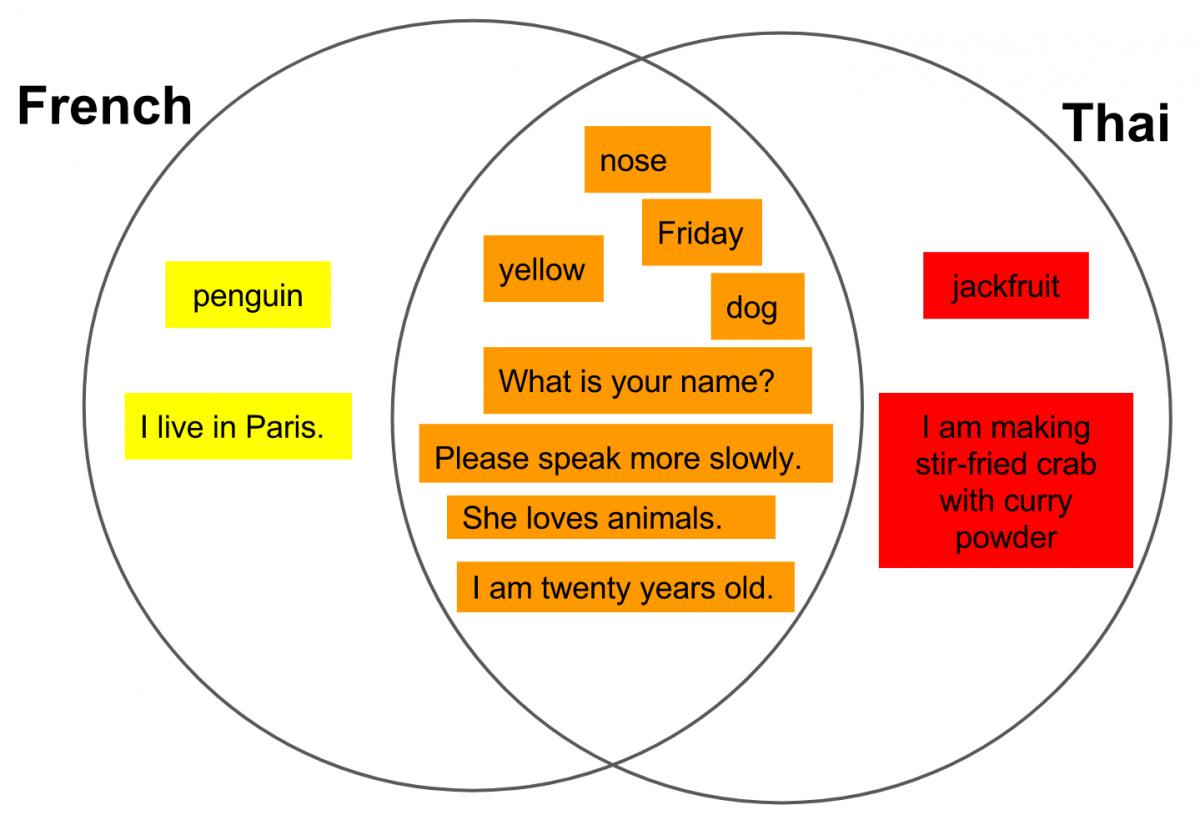 Note that the any-to-any is based on the content having a matching entry in each language. For example, if we have:

Then we will be able to generate automatically:

Of course, as soon as we add "penguin" in Thai or "jackfruit" in French, then we are again able to go from French to Thai and Thai to French for these words.

For example, we would expect to have in the shared overlap all the common words and phrases for:

Basically 90% of the Themed courses material, with only the more obscure words and phrases not matching.

Similarly common phrases are likely to have a 90% match:

We will create any-to-any language content based on matching the English words and phrases.